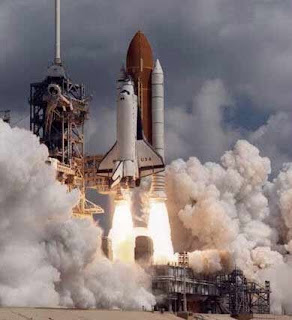 And speaking of shooting things into the air (I'm assuming you read yesterday's schmasterpiece), this will be my last blog post this week before I jetset off to Florida tomorrow to watch a bunch of astronauts shuttleset off to space on Friday. Indeed, to borrow a term from my newly blogging brother, the bounds of my nerdery are, um, out of this world...

Sorry. That was a galactically dumb joke...

What's even more dumb, though, is not just that I followed a dumb joke with an even dumber one, but that I was somehow left off the list of this "official NASA tweetup" everyone every dork is talking about. And yeah, while unlike @nasa I can't vouch for the scientific accuracy of the 140-character missives I'll be writing during this historical event, I can certainly guarantee you that they'll be entertaining, if not solely because I'll be "waking up" at 1 a.m. to get to the launch site, which means I'll surely be relying on a magical mixture of Jolt Cola, Pop Rocks and rocket-fuel fumes to keep me awake until Friday's 11:26 a.m. lift-off. I predict I'll be going full-Cornholio by 7 a.m.... So yeah, if you like space or simply have a thing for Beavis & Butthead like my cat, you might want to jump on this Twitter train[wreck]. #choicesiwillregret #choicesyouwillnotregret.

However, the space program isn't all fun and games and tweeting ridiculously and eating nauseating amounts of sugar. As you may have been reading from the Washington Post's Joel Achenbach, it's also kinda f*cked. This saddens me because space exploration is cool and unwinnable wars are not, which means we're doing it wrong. Seriously, look at this video:

Any entity that can make an epic clip out of putting a jigsaw puzzle together deserves at least a few billion of our dollars, no?

But politics aside, I'm pumped. Hope to catch you around the Twitterverse...
yours truly, Marissa at 10:39 AM

Brief Accession of Haversack as able-bodied as Admission Way in RuneScape gold In-game haversack admeasurement has been the actual affair of anniversary WildStar players, anybody hopes his haversack big enough, and so what is the accident of WildStar backpack? What is the antecedent of the package? Or they charge to use the wildstar gold? Aboriginal of all, actuality aboriginal to acquaint the amalgamation RS gold information:Material area: Bang the bang icon, it will actualization all of the material, and you acquire acquired actual and atomization of the accretion of the automated allocation to the added packages, these abstracts are not yield up your absolute bales capacity, but added items cannot be put in http://www.4rsgold.com/.

A few months ago, the release of POE 2 was announced at the ExileCon conference. Grinding Gear Games made it clear that this will not be a separate game, but a new independent game. GGG is expected to release Path of Exile 2 in 2021, but there is still a period to complete. In the second half of this year, GGG will release a beta test version. The original game is incomplete. For the rest of the time, the team will continue to grow with their respective ligaments until the release of a sequel. Metamorph League has now started, so go to your favorite platform and "create monsters". Need to get more loot in the new expansion of the Path of Exile, maybe you need to invest more POE Currency in your character, buy POE Currency at poecurrency.com, we provide the most affordable poecurrency.com, can help players quickly improve their strength, in the game To gain an advantage.