I have a real problem with how this town's most famous newspaper represents us. Mainly, I don't think they represent us at all. And who is "us"? Sure, I'm including myself and my menagerie of four-legged helper animals on The Anti DC's staff, but I think it's safe to say I'm including you, too. See, I think we've all found a place over here not just to complain about what's wrong with this place, but to stand up to and against those DC stereotypes that keep this city off the world's map of righteous sh*t. I mean, how can we expect to compete with New York, Paris, Moscow, Hong Kong or, goddammit, even probably Iowa City, if this is what we think this city cares about the most?

OK, so I just linked to the Washington Post's 2011 Influential Tweeps poll. As benign as it seems, I'm not hating on the fact that a contest like this exists. After all, I'm on Twitter, you're probably on Twitter, hell, most of DC is on Twitter. Nor am I bitter I didn't make it. My last few tweets have had to do with my new Tumblr, A Million Pictures of My Cat: Lots of Pictures of the Same Cat. True, I may be a self-important, semi-creepy cat lady in training, but I have no delusions about where my tweeting ranks in the grand scheme of things (hint: rock bottom). Plus, I have friends on that list, so it's not a bad idea, nor bad in its iteration entirely.

What I'm complaining about, here, is the small cross-section of categories the Post seems to think describes DC and what this city cares about. If you'll notice, there are no categories for people who tweet about music, art (although there will be, supposedly, according to an update on their site) or theater... And no, if the argument is that it's bundled under "Nightlife," that's pretty damn lame. Really, the only saving graces are the food and fashion categories when it comes to cultural coverage in this poll. All said now, I can't help but read between the lines. Does the Post not give a sh*t about the stuff that makes life worth living? Or do they think their readers don't? I welcome explanations.

But what's most irritating here is that the Post made sure to include this category: 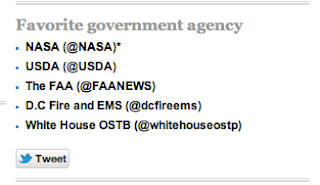 Yes, you read that correctly. It says, "Favorite government agency." Because who needs art and beauty in this world when you have the United States Department of Agriculture? Oy.
yours truly, Marissa at 2:39 PM

& where is DC's DOT? I think that should've been included.

Also, I like how the Post decided not to notice some of the people they're nominating don't live in DC anymore.

Really?! Wow... had I only done more research than a cursory glance, I would've had that to complain about too. Dang. But for real... it's a pretty insulting view of DC, in my opinion. As I've been discovering more and more lately, there are actually a lot of many great arts/music/theater/etc. movers, shakers, tweeters who deserve to be recognized. Maybe I should put my own list together...

I like this, it's good to see our nation selects what is important...to them at least. I'm suprised we don't see OPEC, Al Gore and What did Congress eat today on their list; to keep up with the 'important' concept.

Your blog is very nice I like to enjoy every pages,
belgian chocolate brands
regards...

Unfortunately, not many local news teams effectively represent their city or their country.


The particular Xbox 360 adopted with 28 pct, even though Playstation 3 slim game titles added Twenty-two percent from the publisher's full sales.Planning to the entire year ahead, Ubisoft needs an important increase looking at the key game playing organization.The founder had been specially thinking about their come back to the actual player with the dice type together with Long way away Three as well as Ghosting Recon: Potential Gift, aforementioned being probably the most preordered Mary Clancy name to date in the US.Ubisoft can also be driving their key manufacturers into brand-new places, since it intends to kick off a free-to-play Assassin's Creed about os and Android mobile phone cell phones at the conclusion of the entire year.