I know I said I wouldn't be blogging about my job at the sex shop because I plan on using this material for a different project (don't worry, it's a SFW project), not to mention, I also don't want to get dooced again, but for the good of humanity, I feel compelled to retype a series of text messages sent from the shop last night:

me: Just got asked where we kept the butt plugs again!

mtp: They sure r popular. save one for me

me: Someone's getting a purple one.

mtp: I want a brown one. more realistic.

All I have to say is this: MY MOM IS OUT OF CONTROL.*

Seriously, ever since she found out about my new part-time job, she's been fascinated with the, um, novelties I peddle. And although I, indeed, started this message exchange, I never expected it to go where my mom took it.

And in other inappropriate news -- my mom befriended me on Facebook. And, like the trouble I started above, I'm pretty much responsible as I ultimately decided to accept her e-friendship. I did, however, have some reservations about it. I mean, should she really be seeing pictures of me that look like this? 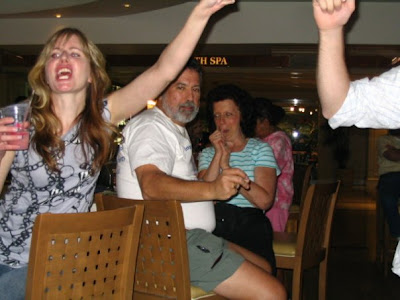 Frankly, I'm not so sure this is all a coincidence. In fact, I'm quite sure this is the perfect storm for jumping to ludicrous conclusions, perhaps even a wacky, off-the-wall conspiracy theory type of conclusion.

What I'm saying here is that THERE'S CLEARLY SOME SORT OF SECRET COMMUNIST SECT OF SEXTOGENARIAN WOMEN WHO LIKE PURPLE PROBES IN THEIR REARS! And if my mom didn't make the disturbing distinction that she would prefer any butt plug she owns to look like an actual turd, then I would have half a mind (currently I only have a quarter of a mind) to think that she was a part of this communist sect, as well. OR IS SHE?! PERHAPS THE PROBES DON'T NEED TO BE PURPLE! Plus, I don't remember my mom being a part of my sweet, mind-blowing "USA!" chant either that night! OH. MY. GOD. It's effing Armageddon.

Now if you'll excuse me, I have to go rock back and forth in the fetal position while my helper horse, Sven, (my helper tortoise, Vladimir, and I continue to feud) readies the bunker. Because, as I've just proven above without a reasonable doubt, the world is clearly about to implode. Take cover.

**By the way, thanks, sister-in-law, for choosing that photo, out of all the photos that could've been chosen, to display of me on your wedding weekend.

***The official Easter Anti DC Original E-Greeting Card For Those Who Want To Simultaneously Impress and Alienate is forthcoming.
yours truly, Marissa at 3:10 PM

Email ThisBlogThis!Share to TwitterShare to FacebookShare to Pinterest
categories: exceptionally messed up sh*t, my job at the sex shop, posts i'll regret, work

SEXTOGENARIAN WOMEN will take over the world!

butt plug will take over the world!

My mom will appreciate that link!

Purple? Fine.
Brown? Uh, OK.
But as soon as the folk start asking for white plugs? The true Armageddon begins!