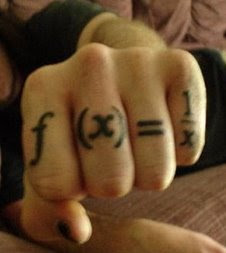 It occurred to me last night due to a little fremeny of mine I like to call math that, for lack of a more accurate term, sh*t is all f*cked up. See, imagine this, or rather just read it:

For putting in nearly two years of hobnobbing with some of DC's finest douches (ahem, Norm Coleman) and then getting fired for what is thankfully not considered "gross misconduct," I am eligible to receive $384 a week in unemployment insurance (welfare) from the District.

After a while, being the intrepid rogue blogger that I am, I decide to get a part-time job at the sex shop, one of the only joints in town hiring, for minimum wage (that's $6.94 after taxes). I put in 21 hours per week, which equals a rather pathetic $145.74 after taxes.

Still with me? Read on because that's not even the sad part:

DC does not allow a person who finds $384 per week barely livable to simply get a part-time job to cover expenses without consequences. Instead, DC recalculates a person's unemployment welfare using the following formula: Add $20 to your welfare amount (in my case, that equates to $404) then subtract 80 percent of monies earned that week working part-time (in my case, that's $116.54). Now, subtract the latter number from the former, rounding up any remainder cents to the nearest dollar and that will be the week's recalculated welfare earnings. If my calculator watch is correct (and it always is), that makes $288.

And here's where math really decided to teach me a lesson:

Now, if you add the original amount of money I earn from busting my ass 21 hours per week at the sex shop (pun always intended) and the revised welfare amount, you'll see I take home a total of $433.74 a week. Not bad at first glance. But then you think about it, or, in my case, my helper horse Sven thinks about it, and you/he realize(s) this:

"Hmm. The monetary difference between doing nothing and whittling away 21 hours of your precious time selling butt plugs to a surprising amount of middle-aged women is only $49.74," Sven said.

I stared at Sven in astonishment, like I usually do when I realize I keep a talking horse.

He continued, "That means for all intents and purposes you make just $2.37 per hour!"

After a night of restless sleep due to this revelation and the fact that Sven snores like a horse (har!), I've come to the following conclusions: 1) The system is stupid as there's barely an incentive to actually get up and find work opposed to simply doing nothing and continuing to suck the taxpayer's teet to the max; 2) I'm retarded (and so's Sven) for not figuring this out sooner; and 3) I hate my life. 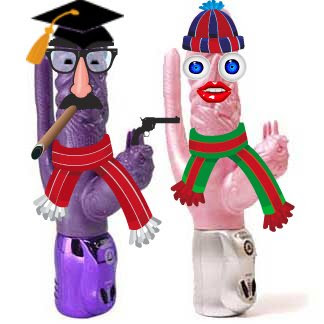 Or, I can make a quick $100, apparently, by pimping what appears to be the DMV's MySpace page. 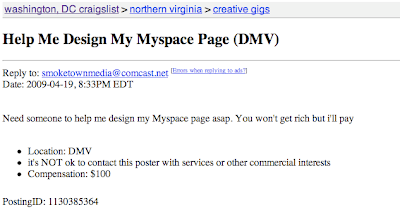 Need someone to help me design my Myspace page asap. You won't get rich but i'll pay

Location: DMV
it's NOT ok to contact this poster with services or other commercial interests
Compensation: $100

REALLY?! My welfare is being reallocated to fund activities such as pimping the DMV's MySpace page? Firstly, why in all hell does the DMV need a MySpace page? It just doesn't make sense. Hmm. Could DMV possibly stand for something else? Give me a minute to Google-ize this sh*t.

Woman, I tried to tell you. I've done the unemployment rounds twice now, and no where that I've filed can you work a part time job, "on the books" because they screw you out of your unemployment. Quit the job and find things to do like babysitting, err, well, something, that pays you CASH!

Cute puppets! What are their names?

jon--I don't think that's a rabbit. That looks like some sort of sabertooth fish.

Plenty of babies need sitting! Though, I'm afraid you and someone's child in the same house...oh...the visions...

As someone who has been unemployed since August (thanks for the extension VA! (how about a second one?!)), I share your frustrations. Why you cannot work at a part time job and earn UP TO what you made at your previous job (minus unemployment) is beyond me. The taxes from your part time work could go towards your own unemployment!!!

Alas, the system is broken.

Knowing that Massachusetts pays up to $575/wk, this is further evidence of VA/DC sucking big time.

Since the reply to adress is evident in the ad, are you being ironic this?

It should say: are you being ironic with this.

Milton Friedman proposed the negative income tax to get rid of this problem, I believe...

velvet--Yeah. I'd love to walk dogs...but what do you do with babies? Change their diapers? Gross.

brian--Agreed. I don't know if they should raise the unemployment, but at least let us work what we can to achieve what we were making before. Or something at least livable...

patty duke--No. Not ironic. It's just e-polite to not post up clickable email addresses of others so they don't have to deal with spammers.

ben--Negative income tax? Would that mean I would just get more welfare? I'll have to look that one up.

Marissa, diaper technology has come a long, long way in the past decade. Complimentary technologies which lessen the burden are "baby wipes" and "hand gel".

I have first-hand experience with this, and I assure you: it isn't as bad as you may be thinking.

chazu--Interesting. And gross. I think if I ever had to babysit, I'd just strap strap the baby to a toilet and come in and flush it every couple of hours. That way, it's crying wouldn't interrupt my very important activities of the day, such as watching the Tyra Banks show.

Keep the job at the sex shop, and draw on your experiences there to write a book. I'm sure there are all kinds of metaphors for D.C. in a sex shop just waiting to be uncovered.

DON'T answer the Craigslist ad, as I think the guy in Boston has conclusively proven that everyone who uses Craigslist is a psychopath.

I like the babysitting idea...that way when I start shooting out kids, you'll be less likely to put them in a tub of water and then go mix yourself a cocktail...

Hello !.
You re, I guess , perhaps curious to know how one can make real money .
There is no initial capital needed You may begin earning with as small sum of money as 20-100 dollars.

AimTrust is what you thought of all the time
The company incorporates an offshore structure with advanced asset management technologies in production and delivery of pipes for oil and gas.

Its head office is in Panama with affiliates everywhere: In USA, Canada, Cyprus.
Do you want to become an affluent person?
That`s your chance That`s what you wish in the long run!

I`m happy and lucky, I began to get real money with the help of this company,
and I invite you to do the same. It`s all about how to choose a correct companion who uses your funds in a right way - that`s the AimTrust!.
I make 2G daily, and my first deposit was 1 grand only!
It`s easy to join , just click this link http://anezisoryl.servetown.com/fegufi.html
and lucky you`re! Let`s take this option together to get rid of nastiness of the life