stuff on stage: Mike Daisey's The Agony and Ecstasy of Steve Jobs

I had my doubts going in. The thought of seeing one guy talk about Steve Jobs for two hours sounded about as fun as having a cold sore. Do not want. But Anti DC Creative Director Terry the Tourette's Turtle insisted. "Mike Daisey is the sh-sh-sh-shit!" he said, adding "Donkey balls!" just for good measure.

Well, if my foul-mouthed helper turtle says so...

I decided to attend the Pay-What-You-Can preview performance last night at the Woolly Mammoth Theatre Company. Surprisingly, though, when I tried to pay what I could with a can of beans and a copy of an October 2007 Cat Fancy, they still asked for money of the legal tender variety. Fine. I'll call your bluff. Moments later, I was in the highest seat in the house. Back row balcony!

But that really didn't matter because the theater isn't exactly big. Mike Daisey, on the other hand... 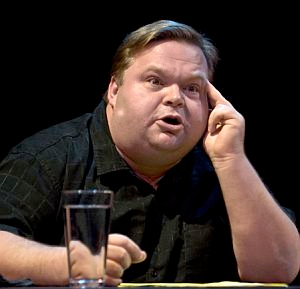 Dude's big. Also, dude's sweaty. Five minutes in I was wondering whether we were going to have a heart attack situation on the stage. But in fact, the only heart that was attacked was my own. (Haha, I just made you read that.)

But seriously, this man was good. For a woman who still often thinks the phrase "killer app" simply means "I'm hungry," the fact that I didn't just enjoy The Agony and the Ecstasy of Steve Jobs, but vociferously loved it, says something about Mike Daisey's skill. Part humorist, part journalist and part storyteller extraordinaire, Daisey's performance hooked me from the beginning like a DC elementary school kid on crack.

And while Daisey ended on a note of activism, handing out single sheets of paper containing Steve Jobs's email address among other things, his monologue never came across as naive. Clearly, he doesn't expect us to boycott Apple or any other technology firm (all of which, by the way, manufacture most of their products in the same way as Apple with kids in Shenzhen), but he does expect you now to think about this part of your life and become a more aware consumer human being.

Unlike the college students with clipboards in front of Whole Foods, however, Daisey's activism is actually enjoyable to listen to. He's funny. He's a natural storyteller. He has the performance quality I aspire to have, minus about 300 pounds and a penis.

However, until I put the finishing touches on my two-hour epic called The Vladimir and the Putin of Vladimir Putin, you should count on Daisey for enlightened entertainment and I strongly recommend you attend. He'll be performing The Agony and the Ecstasy of Steve Jobs at the Woolly through April 10, on Wednesdays through Saturdays at 8 pm and Saturdays and Sundays at 3 pm. Mondays and Tuesdays are obviously for logging into the ol' Macbook and watching funny YouTube clips.

And speaking of the Internet, here's a clip of one of Daisey's previous performances, called Invincible Summer. Well, actually, it's sort of a clip of that. It's more a clip of him expertly handling a massive disruption during one of his performances of Invincible Summer at the American Repertory Theater in Cambridge, Mass. (Amazingly, I guess people in Boston suck more than they do in DC...)

And here's a clip of one of of his previous shows called How Theater Failed America, uninterrupted.

Email ThisBlogThis!Share to TwitterShare to FacebookShare to Pinterest
categories: activities, i recommend, i went to there

These all activism which can be handing out in a single sheet that can be one of the great to know about it.

It can be activism which can good to single sheet that can be great for the product which is performance a quality.