give me pancakes or give me death! or at least give me something else equally as high-brow 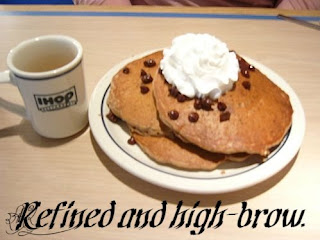 Whoops. I meant to blog yesterday, but I was too busy trying to find a retail outlet in the actual city of Washington, DC, that could sell me a legitimate sleeping bag (I'm talking compression sack, 20-degree North Face sh*t, not some bulky crap from Target). Turns out there isn't one! HOW IS THIS A REAL CITY?!?! What's next? They'll stop carrying Parmesan cheese at Harris Teeter?! Oh wait! According to a reliable source, that store's done that! Although, actually, apparently the Teet had the cheese in its possession; the employees just refused to cut it and hand it to the paying customer.

Now, I don't have a business degree (hell, I'm barely literate), but that just doesn't seem like a good business plan to me...at least in the First World.

It's sad. Sometimes I have flashbacks to the former Soviet bloc living here, except in these flashbacks, I miss out on the best parts of the Soviet bloc, namely foodstuffs from Georgia (the country, not the state).

But speaking of the state, why isn't there a Waffle House here? Those things are delicious. But that's probably too much to ask considering the IHOP per capita is just one in 591,833 (plus one helper horse named Sven).

Wait a second. What's this... Did I f*ck this place too soon? Mayhaps because, according to that DCist link, IHOP is in negotiations with my neighborhood suburban-like shopping complex to unleash its delicious caloric goodness on Columbia Heights!

This delights me. Nay, this tickles me. What's better than all you can eat pancakes starting at $4.99?!

But charm shmarm! We're talking about Columbia Heights here! I'll head to Mt. Pleasant if I want charm (Burritos Fast is quite charming). Plus, I love pancakes, those buttermilk golden discs of wonder smothered in maple syrup served hot (or in IHOP's case, lukewarm) off the griddle...mmm... 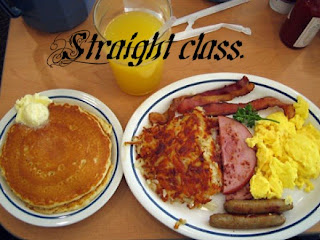 Unfortunately, it looks like I'm rather alone in my intense love of mass-produced hotcakes, at least according to 14th and U, whose author did the dirty (read: dull) job of sifting through all the reactions on DCist, many of which seem to hate pancakes and, ergo, freedom, but somehow buy into the notion that Columbia Heights should remain free of such low-class chains. (Sidenote: I'm willing to bet these are the same people that go to Starbucks on the daily and hit up Target at least once a week to buy whatever mass-produced items made by children in Taiwan that they "need.")

"That is terrible news!"

"IHOP has no business being in CH."

"if IHOP is uprooting Ellwoods, that would be a public health and urban planning disaster."

"There goes the neighborhood again!!! Just when we were coming up in the world!"

"IHOP is low brow in my opinion. It appeals to a wide range of people, including the lowest common denominator of consumer."

Um, all you haters can suck my syrup? 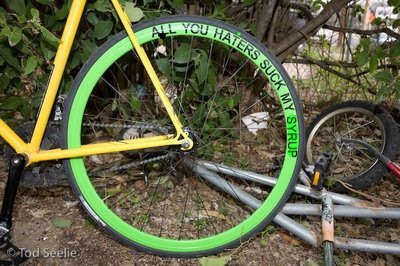 And, apparently, you can suck 14th and U's syrup as well. (Actually, I'd suggest you ask first...unsolicited syrup sucking doesn't sound street legal...) That blog makes a very good point:

It's really that last comment I want to focus on, because it was prefaced by this:

"For renters, (IHOP) increases the amenities for the hood. For the homeowners, I would think it decreases the trajectory a bit."

Translation: Homebuyers didn't pay $500,000 for a 2 bedroom luxury condo to live above a chain pancake shop, and they didn't pay that to have "the lowest common denominator" running around their neighborhood. (Although I'm willing to bet that if you took IHOP's menu and plastered it under the logo of some independent non-chain establishment with a name like "Syrup" and charged $4 more per item, the idea would go over like, um, hotcakes.)

First off, I enjoyed that hotcake pun, so kudos, e-friend. Second off, 14th and U's analysis is spot on. So spot on, in fact, that I'm going to rehash it here but with less analysis and more insults. People are stuck up bitches. May I also add, they're often quite hypocritical. Like I said above, I would bet my entire low-brow minimum wage that the people who complained of the "ghetto-ness" of said venture are the same people who help keep Target in business so they can buy bottled water in bulk, pack it up nicely in plastic bags and drive it home in their Prius (hitting a cyclist or two along the way) to their cookie-cutter condos where they lament about the environment. And pancakes. 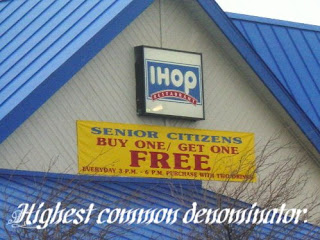 Now, don't get me wrong. I like the idea of mom and pop ventures (Double shout out to Burritos Fast!), but Columbia Heights is not exactly that kind of neighborhood. In fact, it's arguable if Columbia Heights -- at least the part that hosts the DCUSA complex -- is even a neighborhood at all. To me, it looks more like a retail park one would find out in Fredricksburg, Va.

Look, the DCUSA complex is exactly that -- a complex. Complexes are not neighborhood-y; they're not high-brow. And like 14th & U pointed out, DCUSA already houses mom and pop haters like Target, Marshalls, Payless, Lane Bryant, Office Depot, Radio Shack, and a slew of other chains...so what would be the big deal if IHOP moved in? I mean, for processed food's sake, RUBY TUESDAYS is already ACROSS THE STREET. I've been to Ruby Tuesdays. While it might be the most exclusive joint in Russellville, Ark. (seriously, due to it being located in a dry county, they had to turn it into a "private club," which means you need a membership card to get it, and in case you're wondering, of course, I have the card because I'm cool...in Russellville, Ark.).

But the exclusivity of rural Ruby Tuesdays aside, the bottom line is this: Columbia Heights is already well on its way to suburban sprawl hell, despite that it's situated in the middle of a major city. Perhaps it shouldn't be this way. Perhaps it would be nicer to be able to go to some less "ghetto" independent diner to get your delicious pancake fix, but you know what? Beggars can't be choosers. Columbia Heights is already ruined. Would the installation of an IHOP really make it any less neighborhood-y? No. But what it will do is make it tastier.

Now, if only an effing REI would move into DCUSA...
yours truly, Marissa at 8:56 AM

Ya know, if there was one real bonus to growing up in the pit of despair that is Woodbridge, it was the Waffle House by one of the 4 (count 'em, 4) actively operating trailer parks and the choice of two different Denny's (one of which, shockingly, was located by a second of the previously mentioned trailer parks). Seriously, what else is there to do when you're drunk and/or high at 4AM and you need to kill a few hours until the 'rents go to work? People watching at Wal-Mart was really your only other option and even I got a little frightened by those people on occasion.

lemmonex--In full disclosure, I once had a Christmas dinner at a Boston IHOP after spending Christmas day at Foxwoods gambling. Totally Jesus-approved. Clearly, IHOP holds a special place in my heart.

An omelette as big as my head for less than ten dollars.

I too want pancakes. Right. Now.

Also, if you're still looking for a real sleeping bag in the city, there's a Hudson Trail Outfitter on Wisconsin Ave, right off the Tenleytown Metro stop.

Can you start an IHOP-Haters Hater group?
All I want is the sub-$10 heart attack on a plate that is the Country Fried Steak & Eggs served up with a side of hash browns. Is that too much too ask? For IHOP it isn't which is why it will always hold a special place in my (one day quadruple bypassed) heart.

While it is a big brand name, they are independently owned. I understand the owners are local and care about DC. Their first location was in the 9th ward.

The DC transplants are starting to confuse me. I would explain fully, but I am currently at work and this going to take a few paragraphs.

Be prepared for a 1 am rant.

The Onion mentions you by name in this story, Marissa:

There are certain things that DC transplants (DTs) complain that they can’t get in DC that they will never get while living here. The perfect slice of pizza, it’s never going to happen. DC is never going to be the fashion capital of the world. DC will never get rid of Marion Barry. What about the things that can be attained in DC? Like beer with amber and banana in their names sold in a neighborhood liquor store. I am not a beer drinker. Therefore I can’t really expound to much the subject, but I am bringing this up to say if DTs want a beer more exotic than Miller or Budweiser and prefer a liqueur instead of liquor then it might be time for someone to open a liquor store that caters to people these kinds tastes. Which leads me to the question, are there any DTs that are entrepreneurs?

DT s are need of things like quality alcohol , upscale super markets, $20 pancakes or any thing that cost a lot of money, so they can feels rich. Come on entrepreneurs, these people need you. They need to feel that they are different from the scum that inhabit the neighborhood where they bought property. Relieve these fools of their money or they will continue to pollute the comment section of blogs with their incipient complaining.

Of the Woodbridge late night fine dining establishments, I was always partial to the Denny's on Dale Boulevard.

Personally, I would LOVE a Metro-accessible IHOP.

lilu -- I hear that. I just passed about 100 IHOP's returning from the sticks of VA just now.

babybird -- Well, I'll be damned. I ended up going out to EMS in Arlington. The bag went over swimmingly.

jfo -- If need be, I'll make like Moldova and Twitter Revolution to ensure we all have equal opportunities for heart attacks.

patty duke -- Funny you should mention it. If I thought I was going to live here for any length of time, I'd go into the sandwich business. I think it's sad that Subway is basically the best you can get...although I love eating fresh. It would be called Sick Bitches Sandwiches and Shizzles Smooth Flow Juice. It would be a sandwich and smoothie shop. I cannot take credit for the name, however. That's one of my would-be business partners.

ned -- You're my favorite. When I read that wine nearly shot out of my nose.

shannon -- Welcome to the revolution.

You know what? I love sarcasm and satire but I am still on the fence about the bitchiness.

The bitchiness is hot.

I hear Taylors, located in the H st corridor makes great hoagies and oher sandwiches. The owner hail from Philly. Their aim is to bring a decent hoagie to D.C.

thomas-- I'm sorry to hear you're on the fence about bitchiness. It really enhances the satire and sarcasm. Or I could be delusional...

patty-- Why is everything awesome on H Street?

Starting a bizness with shizzles sounds like the best idea ever.

You want in? You'd be investor No. 5 along with Shizzles and I. I'm sure you can guess who the other two are.