all i want is a delicious khachapuri 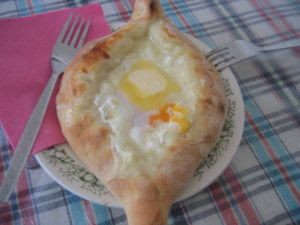 You'd think with all the embassies, consulates and international tools around, one would be able to find any cuisine he or she wanted in Washington, DC. Unfortunately, however, like so many other idiosyncrasies of this tepid swamp town, logic and reality don't coincide. Let's take Russian cuisine, for example. The Russian Embassy in DC is huge. It employs hundreds. Where the hell do these people find the delicious black breads, blini and pelmeni that make up the national proverbial bricks of Russian cuisine? (Mayonnaise, naturally, is the mortar. Not proverbial.)

There is Russia House, yes, but that place is expensive. I'm sure whatever creations Executive Chef Matthew Cordes comes up with are tasty, but there's something so satisfying about eating a $3 bowl of borscht served up from a giant vat made by a woman with tree-trunk legs named Olga.

What makes me even more perturbed is the lack of other post-Soviet cuisines in this city, especially Georgian. The day after Russia rolled (additional) tanks into Georgia, I was in Brooklyn eating what might be the most underrated cuisine on Earth. Since I'm far from a foodie, I'm not sure how to describe what's so great about Georgian food, but I remember falling in love with it in Moscow for its total lack of mayonnaise, its usage of spices other than salt and the glory that is khachapuri.

Khachapuri is almost other-worldly. It's magical. It is so delicious, that it's hard to believe it's made with human hands. In fact, the recipe is so strangely complicated (at least for someone whose idea of "cooking" is opening a can of chili and heating it up) that I'd rather imagine khachapuri as a product of a magical oven that simply pops these creations out when an attractive waiter named Nikoloz takes your order.

And although it's simply a cheese-filled bread, it tastes as if the cheese was made from the milk of some mythical animal raised especially for this recipe and the dough kneaded by democracy itself. So epically good. In fact, in retrospect, I wish I had focused my Master's thesis on the power of the khach, because if I were Russia, I'd invade Georgia to reclaim that delicious sh*t, too.*

Anyway, I savored every last morsel of delicious khach, lobio, satsivi, bazhe, lamb and pork shashlyk and several other dishes because I knew, coming back to DC, I'd sooner run into a beautiful man wearing a slim-fitting suit, than have a choice in meal that didn't involve India, Ethiopia, El Salvador or Chipotle (people inexplicably seem to love that sh*t around here) -- the four international cuisines that seem to dominate the DC market.

This is something I don't understand. I can get a samosa, I can find injera, I can eat several varieties of papusas, I can get a rather sub-par burrito, but tastebuds forbid I find a good clay pot of kharcho in this city.

And it goes far beyond Georgian cuisine and its many different and delicious walnut-based sauces: I can't for the life of me find a decent fish taco in this area. As far as I'm concerned, this isn't just a want, it's a need -- a basic human right, if you will (and you will...or won't, if you're in DC).

Also, may I add, I love hamburgers just as much as the next carnivore, but please, restaurateurs, with the recent openings of both Hell Burger and Good Stuff Eatery, can we put a moratorium on beef-patty-based bistros? One fish taco stand! That's all I'm asking for! And not a sh*tty fish taco like you'd get at Plaza Azteca or Don Pablos, I'm talking about the kind of taco you'd find at a road-side stand while coming back from scuba-diving with your hot scuba-diving instructor outside of Playa del Carmen. I'm not asking for the instructor here, just the taco. This request is not outrageous!

*Although in all war-nerd seriousness, the Russia-Georgia issue is incredibly complicated and, unfortunately (but unsurprisingly) the U.S., Russian and Georgian media are dumbing it down exponentially, in my opinion, via their respective retardulous biases. The Russian media blames Georgian oppression of Russian citizens in Georgia's breakaway regions (albeit without acknowledging the only reason these "Russian citizens" have Russian citizenship is because the Kremlin magically declared them all citizens of Russia one day); Georgia blames Russia for keeping them down, while downplaying the long-standing issues that have plagued the breakaway regions for years; and the U.S. is stuck in its own partisan clusterf*ck, caring more about framing the issue in terms of the upcoming presidential election. In reality, everyone's to blame and the U.S. is not helping by seizing this opportunity not to diffuse the situation, but to simply use it for political gain. In other words, thanks to our collective ignorance and the complete failure of politics, we're all going to straight to hell. At least those of you in New York, Chicago, San Diego or any other reasonable city can pack some khach for the road...
yours truly, Marissa at 2:05 PM

Tortilla Cafe right by Eastern Market has a delightful swordfish taco. Well, at least they did in 2006, I haven't been back since then out of sheer laziness, but I'm assuming it's still around.

Baltimore gets a lot of crap from the too-cool-to-be-alive DC kids, but I know you could find this type of cuisine (or its somewhat bastardized cousins) there.

Swordfish fish tacos? I'm intrigued, but not convinced. I shall make a pilgrammage in the near future.

"Too-cool-to-be-alive DC kids?" Wow. Now that's an oxymoron. Anyway, I'll be on the lookout for delicious khach next time I'm in Baltimore. Thanks for the tip!

I think you're screwed on Russian food. In the burbs, Taqueria Poblano makes a decent fish taco.

Austin Grill had a decent fish taco once upon a time (7 or so years ago), don't know if it still exists though.

My kingdom for a Peruvian pollo a la brasa place within city limits, and don't give me any Pollo Campero bullshit.

For what it's worth, I don't know much of anywhere to get a fish taco in NYC either. There's this one bizarre place that's like basically the back door of Placido Domingo's seafood restaurant Pampano, and you enter through the atrium of some soulless office high rise, but it's a bit out of the way. And they really do keep the hachapuri far from the reach of most of us--it takes a fucking fortnight on trains one does not usually take to get out to that shit. B. has the right idea about opening a Georgian place closer in...
(I think you'll guess which of your dining companions this is from.)

Austin Grill. Well, according to Google, it still does exists in numerous locations. However, I'm not sure there's enough grit in this establishment.

If geese eat chickens, is that cannibalism?

I think, in fact, I can guess which dinner companion this is! Agreed, the subway situation is touch. It's almost worth buying a car to get that khach more often. Or, seriously, let's go into business!

Just last night I had dinner at a Turkish Restaurant near Eastern Market. My dinner was described as a pizza in the shape of a canoe. It looked exactly like the picture you posted and was quite good (lots of Feta and lamb was involved). Perhaps this is a Turkish specialty from the border of Georgia?

agreed on the baltimore comment. the food options here are astounding.

I don't know... I think it only would be cannibalism if a goose ate a goose.

And look, I didn't even make the easy beef stroganoff joke.

The cheese in khachapuri, sulguni or suluguni, is generally made from goat milk. It's good as hell. Kyiv lacks the variety & level of georgian places that moscow has, so I FEEL you sister.

The seafood alone is pretty much better than anything I've had in DC.

What?! You're holding out a beef stroganoff joke?!?!?! How could you!

Goats are f*cking awesome. But at least in Kyiv you have plenty of stout babushkas serving sub-par borshcht.

If you are looking for pelmeni, black bread, kvass, and other Russian foods, try the Russian Gourmet (locations in MD and VA). Sometimes they have blini as well...and the customer service is quite similar to what you'd find in Moscow! No khachapuri, though. I had to go up to Brooklyn as well to get my fix.

And yeah, the fish tacos here suck. I never thought I'd actually be craving Rubio's. WTF.

Rubio's and Wahoo's Fish Taco both suck. That is a fact. California Tortilla is better than Chipotle, but the latter is still acceptable. That is also a fact. Baltimore is cooler than DC. Another fact. There's about 4 Japanese / Sushi places on Charles Street alone. Aloha Tokyo is the latest and greatest. I went there opening night and got extra sushi and fish for free.

Part of the reason the corporate quick food places are so popular here is EVERYBODY needs EVERYTHING right away and won't sit down and try something different. I'm guilty of it myself.

I tried pronouncing some of the food names in this post and lost 3 teeth and a lung.

Hi Marissa! Do you really think that making khachapuri is so difficult? You just need to knead the ingredients, form a khachapuri (loaf or boat), fill with cheese and / or egg and... bake :) Maybe it is my unperfect English that makes you thinking about the complications but if you try once, you will understand how uncomplicated it is :) (but yes, you need to have a good quality cheese!)
Greetings,
Ewa

I found you on my pal Velvet's blog. You got me thinking. What you've said is true about Russian restaurants in D.C....and yet Rodman's has a Russian food section, and there are Russian markets. So I thought..."What about Baltimore?"

I was planning on making some Khachipuri myself as part of an Olympic Feast but found recipes that required me to punch the dough with a wet fist and quickly switched to guacamole.

Russian Gourmet is definitely a good option for Russian food, though. They are a bit nicer than in Moscow, but I mean, they don't smile or anything. Having some pelmeni in your freezer is an unparalelled source of comfort in the winter.

Thanks for the info. I'll check out Russia Gourmet and complain, er, write about it after the fact.

Agreed about the corporate chain restaurant problem, although I don't think that's just DC. I think that's all of America.

Don't worry. I'm sure a khachapuri in the blender is probably just as delicious.

Hi! Thanks for stopping by! To a cook I bet your recipe is straightforward and simple, but for me (keeping in mind I'm functionally retarded in the kitchen) anything that involves and oven at all will confuse me. A more competent friend of mine and I are going to try your recipe out, though, soon. I'll let you know!

Wow. Thanks for those links. I might have to head out to Baltimore for further research!