good fun without the sun

You may have noticed I'm not the kind of blogger who writes too much about my social life. There are several reasons for this. For one, I'm surprisingly a very private person when it comes down to it, as are my closest friends (surprisingly I do have some). And secondly, I mostly refrain from talking about my social life because it would sound a little something like this: I acquired Netflix this weekend and watched five films back-to-back. (I didn't say most of my friends weren't streamed movies online.)

But don't worry. It's not as pathetic as it sounds. See, I'm not so much of a recluse that I completely decided to shut myself off from humanity this weekend. Nope, I twittered about it! Wait. So that is as pathetic as it sounds. Actually it's more pathetic because it sounded like this: "Joined Netflix ergo will be watching movies all day between naps. Stay tuned for several 140-word film reviews..."

And just like a can of beans to a hobo (or, um, me), I didn't disappoint. Of course, considering I fell asleep through large chunks of almost all the movies I watched, the reviews went something like this: "No Country for Old Men -- Not as good as the book. On the bright side, I only fell asleep during it once! Next up : Bottle Rocket." Or this: "Not sure why Bottle Rocket is supposedly a cult classic. There were a few good 1-liners, but overall=yawn. Next up a docu called Jesus Camp."

And that's when I woke up. See, not that I would ever presume to know for sure, but I think it's safe to deduce that Jesus Camp would scare Jesus. It certainly scared me.

But I'm not even most scared of the fact that these people believe we're in some sort of "God War." I'm mostly just freaked out by the length and width of that kid Levi's rat-tail. Now that's battle-worthy.

And speaking of battle-worthy, it's probably time I declare a half-hearted war on my self-created image of a wayward loner who spends her weekends loafing around pantsless covered in graham crackers crumbs, chocolate bar wrappers and microwaved marshmallow remnants, which, by the way, is not a good idea if you want to be able to ever wash your dish again. That sh*t stuck to the plate tighter than Sea-Bond to your grandma's dentures. But at least I didn't get any on my pants (marshmallow, not Sea-Bond). Although my adult bib is a mess (with both marshmallow and, inexplicably, Sea-Bond -- who's been using my adult bib?! SVEN?!).

Anyway, I chose to let Sunday pass me by while I watched slept through not only No Country For Old Men, Bottle Rocket and Jesus Camp, but also Transsiberian and The King of Kong (which is really good, by the way) because I was exhausted from the previous few days, which I split between hanging out in and around beautiful Charlottesville, Va., and working at the sex shop in douchey DC.

Clearly, one of those activities was superior to the other and since this blog is called The Anti DC, I won't even bother going into which activities I preferred more.

The best part of my sojourn out to Virginia though occurred on Thursday morning when I happened upon Wonder Nut Farms. 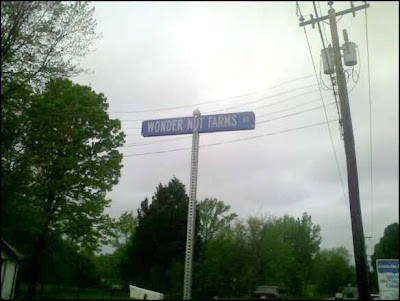 Which is located just west of BumpASS. 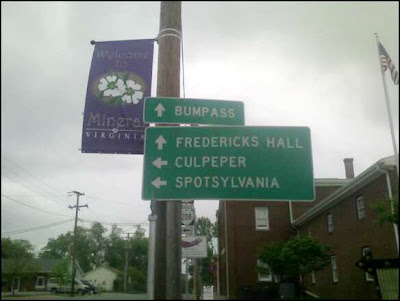 Uh, or not. Wait. Nevermind. Harry Potter, Public God Enemy No. 1, is British. This country is still safe.

Wait. No. We're f*cked. And I'm not even talking about the total rejection of science so much as that kid's rat-tail again. Yikes, in Jesus' name...
yours truly, Marissa at 8:32 AM

Email ThisBlogThis!Share to TwitterShare to FacebookShare to Pinterest
categories: america f*ck yeah, exceptionally messed up sh*t, i recommend, jet-setting, people, people who will see me in hell

When I watched Jesus Camp, I had to pause it five minutes in and pour myself a large adult beverage. I think it was triggered by the comment of Large Crazy Woman that she wanted U.S. kids to be as devoted to Christianity as Muslim suicide bombers are to Islam.

When I watched J camp, I remembered thinking that if this is what "home schooling" is, then it should be banned. That kid won't know shit whne he's older.

jfo-- Sadly, Large Crazy Woman has more access to a firearm than most other people in this country.

anon-- I think that is extreme home-schooling. I doubt if it's all that crazy. Although, really, when you think about it, it's not too far off from my small-town public school experience during which I learned the U.S. apparently decidedly "won the Vietnam War." Uh-huh.

Bumpass near Wonder Nut Farms. I thought that was illegal in VA?

My Sunday consisted of trying to summon the motivation to put fenders on an old ten-speed and go for a ride.....(no really), but I only got as far as taking the wheels off to ease the installation process. (hmmm) Now I have a wheel-less bike sitting near two dis-embodied wheels. (All that is illegal in all 50 states; but not DC)

Anyway, here is something I spent 5 seconds searching for; just for you:

"Another sunny day, I met you up in the garden
You were digging plants, I dug you, beg your pardon

I took a photograph of you in the herbaceous border

Another rainy day, we're trapped inside with a train set

Chocolate on the boil, steamy windows when we met
You've got the attic window looking out on the cathedral

And on a Sunday evening bells ring out in the dusk"

ned: That'd be a whole lot creepier if that wasn't Belle & Sebastian. Thanks.

marissa, i wish you were in Moscow with me so we could lie on my pull-out couch all day and watch bad Russian reality Tv. as it is, i just download model shows that are even crappier than ANTM and watch them by myself on my computer.

Jesus Camp reminds me that it's possible for groups of people to hallucinate together. This animal finds the pachyderm community more appealing.