lend me your toots 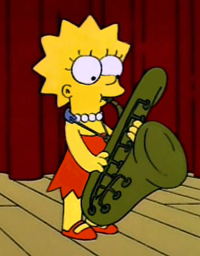 It was a mind 'sploding weekend. First, taking into account my rudimentary non-knowledge of theoretical physics and a Woody Allen movie, I realized time travel might be plausible, then I learned it actually is!

...Well, at least in mind and spirit.

See, my constant companion Anti DC Creative Director Terry the Tourette's Turtle and I spent our Saturday evening feeling extremely mid-century beatnik tucked into the corner of the dimly lit Twins Jazz club with a bottle of cheap (but delicious) sauvignon blanc and tapping our feet to the sounds of the four-piece band on the cramped, low-ceilinged stage. It was like a scene straight outta Mo' Betta Blues.

Except not really because: 1) Wesley Snipes wasn't on sax 2) Denzel Washington wasn't on trumpet; 3) in fact, no one was on trumpet; 4) the most dramatic thing to happen was we had to wait about 20 minutes from when we ordered our bottle of cheap (but delicious!) wine until we got it; and 5) obviously, we weren't in New York, but right here in DC, which came as somewhat of a surprise considering this is the nightlife stereotype we're up against...Ye gods...

But moving on, I saw Jim Snidero, a New York-based, world-class sax player whose skill is second to none. Or at the least, only second to sexy sax man, whose leather suspenders, tight pants, and molester mustache obviously keep him in the lead. But for real, despite that I'm cracking jokes, Snidero's skills are no joke. And neither are the skills of the three other local musicians (a pianist, bassist and percussionist), who Snidero recruited to play with him at Twins.

And let's talk about Twins. Although it only opened a few years ago in its current location on U Street between 13th and 14th, it has the feeling of an old attic in someone's house that's been there for generations (and strangely endearingly, it sort of smelled that way, too). Situated on the second floor above the jumbo slice with the disco light in it (of course...), the single long, thin room's red walls are plastered with posters and paintings of jazz-inspired images, and the floor is lined with two rows of small, candlelit, table-clothed tables, many of which you have to either climb under or physically move in order to get to. And while a claustrophobe might feel cramped, I was relieved to spot this array of seating options that could accommodate singles, couples, and larger groups alike due to the Tetris-like changeability of the table arrangements.

And while sometimes it's still expected that the table arrangements would perhaps be more interesting than the crowd (I mean, you clicked on this link, right?), in the case of Twins, it definitely wasn't. This place attracted a cross-section of everyone, from the post-college circuit to my generation to older clientele. And in a town that, for reasons I won't attempt to cover now, tends to self-segregate in terms of what quadrant someone lives in (NW, NE, SW, SE), Twins had the feeling of attracting people from all of them. This didn't feel like DC. Or...or maybe this felt like how DC should feel. No nametags, no pretense, no networking, just a healthy love of good music, good libations and good damn times. Worlds collided and sh*t, like a Swedish hair band and Edvard Grieg. The result was mind-blowing.

And so, yeah, I'll be going back for more fan-sax-tootin'-tastic times, especially when Snidero returns, which he told me he does about four times a year since he's originally from here. And his thoughts on Twins? Well, he gave it his professional seal/sax-toot of approval. "This place is a real jazz club, I mean, look around," he said. I did, and I will again because Twins is a welcome, mellow alternative to the U Street dance club scene and, obviously, most everything on a weekend in Adams Morgan, where dodging piles of puke has become the norm there on a Saturday night.

And speaking of piles of puke, to change subjects and negate all the hope I just instilled in you about humanity, if you have yet to roll your eyes at recording [f]artist Michaele Salahi "singing" her [s]hit single "Bump It," then allow this to be your chance because this might be the most horrifying stab at performing to ever be recorded and subsequently broadcast to the world to mock. I mean, really, who is telling this stoned emu singing, "Like I'm so hot and, like, you're so not," that she's talented? And that poor UPS man they recruited to rap with her (seriously, peep his outfit.) This is not what they mean by "What can Brown do for you?"

Email ThisBlogThis!Share to TwitterShare to FacebookShare to Pinterest
categories: nightlife, reasons to live, u street

Is there something wrong me that based on the title of this post, I thought it was going to be about farting and I was a little disappointed that it was about jazz? Actually, don't answer that question. I already know there is something wrong with me.

Salahi is a toot in the fart sense if that makes up for anything!

I dont wanna see you anywhere
but Upstairs where I can honor
you N look into your indelible
eyes for all eternity...

Cannot do that in the
Abyss o'Misery, sunshine:
you shall be beaten blackNblue
round the clock by filthy demons
for the lengthNbreadth of eternity.

Then, you'll loooooove our
dichotomized,
altruistic symbiosis, baby.
You'll love it...
or send the check for a refund.