This is no surprise. Considering DC is home to all three branches of government, by moving here, you're pretty much condemned to this stereotype from outsiders: DC was, is, and will probably always be viewed as a political town. While that reality sucks, it becomes even suckier knowing that this city's flagship publication seems not only to thrive on this stereotype, but to actively perpetuate it, and not just within our own community, but to the world. Behold this sh*t, via, of course, the Washington Post:

Separated by a salon, a sushi place and an ideological chasm are the dueling happy hours. One conservative, one progressive. One long-standing, the other brand-new. One in a hey-bro, populist pub, the other in a mod, sunken lounge.

Leave your prejudices at the door.

Find new ones inside.

Overheard at the conservative happy hour First Friday at Union Pub: “I’ll be over at the Faith and Freedom conference tomorrow. . . . They beat Notre Dame this year. . . . When Snowmageddon happened two years ago, I had a reservation at Minibar. . . . The Weiner jokes are overwhelming me right now.”

Overheard at the progressive happy hour First Thursday at Lounge 201 the night before: “I’m also a PhD student. . . . I’m a lawyer by day but . . . We lost the message war! . . . Libertarianism doesn’t make sense. How can you abolish everything? . . . How drunk do I have to be to say, ‘Hey, Ron Paul intern’?”

What the f*ck is this? Is it news? Certainly not. It's widely known (and easily Googled) that political and partisan bars exist around DC. Is it funny? Kind of, but only because of the cherry-picked Onion-style quotations chosen by the article's author Dan Zak. But it wasn't written for laughs, it was written to be somehow insightful about DC culture! Is it? Hell no, which is probably why this article made such easy fodder for Gawker, the New York City-based blog that easily concluded from the combination of the above article and this previously published one that DC's social scene sucks.

And Gawker's right! I mean, who am I to disagree with their analysis when the serious Post articles written by serious Post reporters already make it sound so stupid? For the love of God, in this latest debacle, the Post not only wrote about the party habits of a guy named "Rich Counts," an aptly named Republican, but they also attached an accompanying photo essay, featuring a liberal thinking this is a good time: 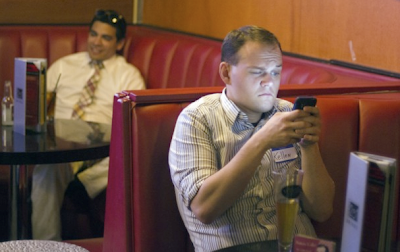 Look, I'm not one to defend DC -- especially its bar scene, which I think usually sucks a fair amount of balls. And so, I guess, if Zak's editor asked him to do a story on drinking in DC, perhaps the above was the only straw he could grasp. Even so, this is no excuse because, really, what the hell kind of purpose does this article serve? Well, besides making it easy for outsiders to mock us, that is.

I, for one, can't see any. Sure, perhaps it illuminates another hair in the crusty buttcrack that is DC's social scene, but do we really need to see it? All the ass hairs the Post seems to spot seem to look the same so far, so until they find one of those hairs that grows really long for whatever reason, I suggest everyone just stop writing about how political DC's culture is. It's not f*cking news. Maybe the real news story should be how DC's most famous paper has about as large a scope of interest in and understanding of this city as a tourist from Idaho.
yours truly, Marissa at 2:10 PM

Rich Counts is a badass name!

Rich Counts should change his name to Dick Counts (DC). He is everything DC stands for and is about. Plus, he could help those liberals out and take some of the heat of that Wiener guy.

Agreed. Rich Counts sounds like the alias of a superhero. Perhaps Dick Counts is that superhero?

Ur right about the superhero. I've actually met the guy.